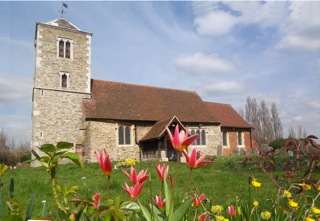 Holy Cross is part of Basildon’s history. It has been a centre of worship for nearly 800 years and has seen many changes during that time, never more so than in the last 70 years with the advent of the New Town of Basildon.  It is now part of the Parish of St Andrew with Holy Cross.

The Chapel of the Holy Cross was first mentioned in 1230. This early church no doubt stood on the site of the present building and belonged to the Manor of Botelers, later known as Moat House Farm, of which only the moat remains – now part of Holy Cross recreation ground. With the coming of the New Town the sites of Oliphants (a Tudor house destroyed by fire at the start of the 20th  century) and the Rectory (demolished in 1962) were covered by the Ford Tractor Plant.

In the churchyard there are a number of gravestones near the south door which date from the early 18th century and are typical of that period. The Gibbons family, who farmed at Whitebridge Farm (Crays Hill), are buried close by.

The oldest part of the building is the nave which dates from the 14th century. The chancel was rebuilt in 1597 using Elizabethan handmade red bricks; this was at the time when Arthur Denham was Rector. The tower also dates from the 14th century and houses three bells.  The tenor bell is over 550 years old and was cast by William Chamberlain of London. (About 100 of Chamberlain`s bells remain today.) It weighs over 6cwt and is inscribed “Sancta Margareta Ora Pro Nobis (St Margaret pray for us) together with three shields.  The Treble bell is inscribed “James Dodson, Churchwarden 1756” and “Lester and Pack of London Fecit”.  The middle bell dates from 1634 and was cast by William Land of Houndsditch. It weighs just over 4cwt and is inscribed “W Land 1634″.

The bell frame is of oak and may date to the 15th century with the wheels and keyed type ironwork possibly 18th century.  In 1970 the bells were tuned at the Whitechapel Bell Foundry.  On their return they were fixed for hand chiming as the frame was no longer able to bear the weight of the bells. Land given as an endowment for upkeep of bells and bellropes (Bell Rope Field) was bought by the Development Corporation in 1956. The proceeds still being used for upkeep of bells.

The church is entered through a 500 year old porch, which was restored in 1957. The 16th century door is made of overlapping battens and the spandrels of the roof truss over the door feature very interesting carvings of a bear, a ragged staff and a dragon. Inside the church, the roof dates from 1500.  A door in the north wall, now blocked in, dates from the 14th century. In a number of Essex churches there is a blocked in door on the north wall, opposite the font. This is sometimes called the Devil’s Door, through which the Devil is said to have escaped when driven out of infants at Baptism. The south wall has been rebuilt above the plinth.

The three windows in the nave are 15th century. The east window and two small windows in the south wall are modern. The stained glass tracery window was donated in 1992.

The altar was presented to commemorate the Coronation of Edward the Seventh in 1902. The old communion table, (still in use in the church), and the communion rails, with twisted balusters, both date from the early 18th century.

The weather vane on the tower bears the initials of Francis Aylett and the date 1702. This year saw the accession of Queen Anne and restoration of Holy Cross.

Aylett the Churchwarden oversaw the project which was financed “by the cheerful contribution of ALL parishioners” at a rate of 11s 6d in the pound.  Aylett’s family lived at Oliphants, but very little is known about him.

The silver chalice dates from the reign of Queen Anne, inscribed “Mr Francis Aylett, Churchwarden 1710” and “AR” and engraved with the Royal Coat of Arms.  Possibly it was a royal gift.  On the north wall of the nave are the arms of Queen Anne, before the union of England and Scotland, painted on wood. 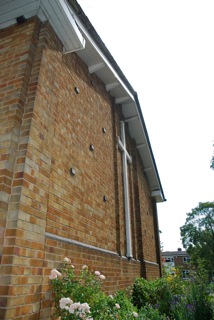 St. Andrew’s Church began life in the early years of the building of Basildon New Town. The first service was held in “Vernons” bungalow (the owner bought it with the proceeds of a pools win) on the evening of 26 September 1954.  The congregation also met in a Community Hall, and held some Communion services at Holy Cross Church.

In July 1955 building work began on the dual purpose church/hall in the Fremnells.     The service and ceremony for laying the foundation stone of the building took place on 15 October 1955, with a carol service taking place on Christmas Eve of that year.  The dedication service for the Church was held on 23rd May 1956, when an estimated 500 people attended to celebrate the church’s dedication.

John King became the first Priest in Charge of St Andrew’s, in September 1955.  He was joined in January 1956 by Church Army Captain Colin Shaw.  John King’s last service was in September 1961 with seven further full-time clergy holding the post to date:

Our regular services each week are :

Third Sunday of the month (January-October only)
4:00pm – Evensong at Holy Cross
(Church open from 3:00pm for musical Entertainment)

Our services will still allow us to use some social distancing.

St Andrew with Holy Cross is a registered charity.

This website uses cookies to improve your experience. We'll assume you're ok with this, but you can opt-out if you wish. Read More